Hello it’s Less! Last night Kevin and I went out to eat. It was a nice break from the dining hall even though I’ve actually been pleased with my meals this past week. We decided to go on an adventure to Porter Square to find a restaurant. Last summer I biked to Porter square almost every day to go to yoga and I would always pass by this restaurant that tables outside where I would see people eating delicious looking food. I kind of wanted to go there but I couldn’t remember what it was called. Kevin also had a restaurant in mind. It turns out we were both thinking of the same place called Christopher’s ! 🙂

The menu at Christopher’s ranged from salads and soups to burgers, pasta, burritos, and pizza. Almost anything you are in the mood for they have, which was awesome because I was trying to figure out what I was hungry for and there were lots of options. I settled for a vegetable burger with pesto and roasted red bell peppers that came with a side salad and fries that I substituted for sweet potato fries. Kevin ordered a chicken burger that also came with a salad and fries. We also got bruschetta as our appetizer. The bruschetta came on huge pieces of bread! I had never eaten bruschetta like that before and it was great!

This was my first time ordering a veggie burger. I’ve eaten chickpea burgers but never a legitimate veggie burger. And it was amazing!! I could see the vegetables in it including broccoli, corn, green bell peppers. The texture was incredible. It kind of reminded me of tempeh. Soo good!! I don’t think all veggie burgers are like this but I am more open to ordering them from now on if they are known for them! I ended up liking the regular fries better than the sweet potato ones so Kevin and I traded. 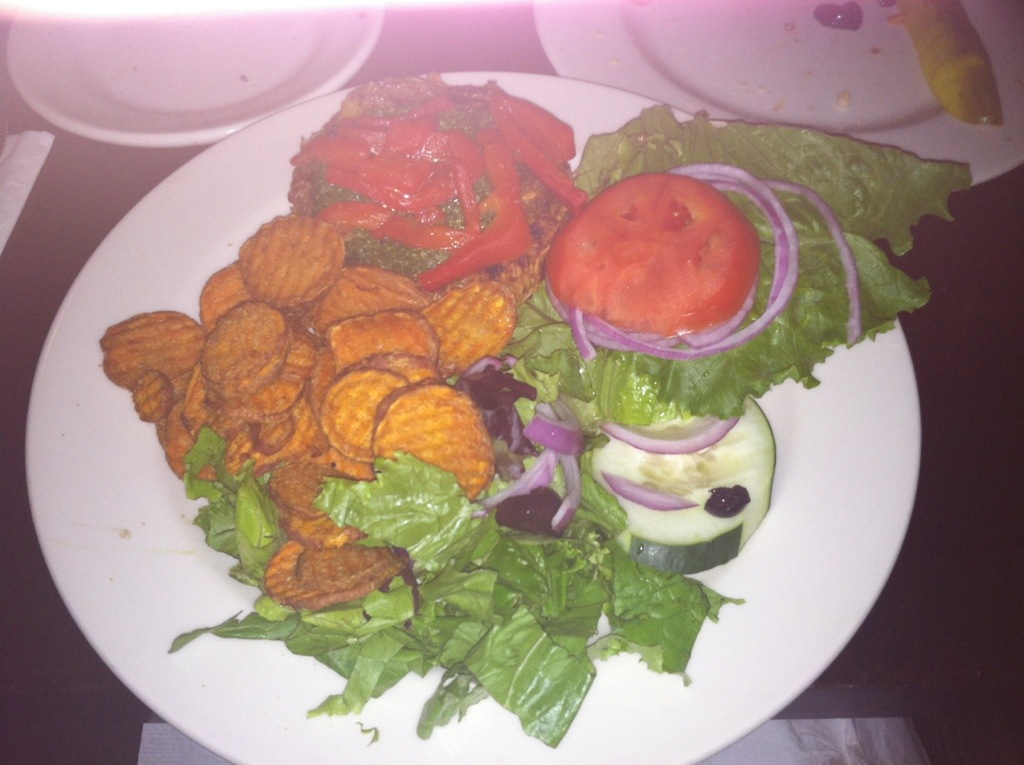 I apologize for the picture. The lightening was dim and my flash wasn’t working well! Overall a fantastic meal! I would definitely recommend this restaurant!